What is Propaganda? And why do we care?

It's not as easy as you might think to spot hidden messages. Propaganda does not rely on pictures or words. Sound, scent, color and design can carry many hidden messages. Propaganda designers know you are on your guard. To get around your guard, they don't put one message into a piece of propaganda - they put lots of messages into each piece! The more you know about propaganda techniques and how they work, the less likely it is that someone will sneak something by you!

Is everything we see and hear propaganda? No, it is not. The word propaganda refers to any technique that attempts to influence the opinions, emotions, attitudes, or behavior of a group in order to benefit the sponsor. The techniques of propaganda are used every day, in the military, in the media, in advertising, in politics, and in all sorts of human relationships.

To protect yourself against the techniques of propaganda, three good questions to ask yourself are:

Is Propaganda always negative?  Propaganda does not have anything to do with negative or positive. It's a technique. The word propaganda refers to anything that attempts to influence the opinions, emotions, attitudes or behavior of a group in order to benefit the sponsor.

The Use of Propaganda During the American Revolution

There is nothing new about the use of propaganda to sway public opinion. Here's a recruiting poster used in 1779 during the American Revolution to help recruit Southerners to the Patriot cause.

Victory is in our grasp. The hated Redcoats are on the run! Our cause is just, and our army is invincible. You must be a part of our glorious victory over those dirty Brits. Be every boys' idol! Be a man among men! Be a hero to the ladies! JOIN UP TODAY!

Those who do not join us are cowards, and they will get what they deserve. Their mothers will weep to have gived birth to such sickly yellow worms!

BE AWARE: the Britist cannot face us in the battlefield, so they have planted spies among us to undermine our efforts. Pay attention to what your neighbors say because the easiest way to identify these traiterous rats is to see who stays home when the men of Carolina march out to expel the arrogant invaders. The success of our righteous casue depends on you patriotic citizens of South Carolina!

Propaganda can be very sneaky. Think about it:

Examples of pro-independence propaganda during the Revolution - the Stamp Act, the Boston Massacre, and more

How do you get people to join your cause? Propaganda lesson plan for teachers (Donn) 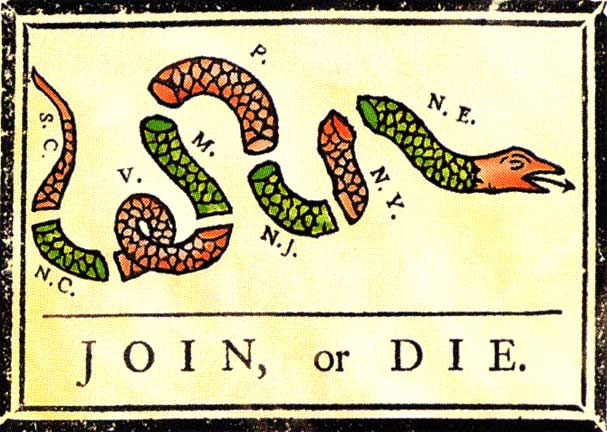 For Kids and Teachers

Brink of the Storm and the Civil War

Growth in the West

World War I, The Great War

Free for Classroom Use - American History Powerpoints and Presentations